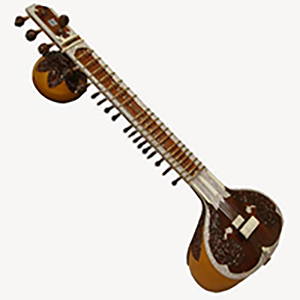 Sitar is a plucked stringed instrument, originating from the Indian subcontinent, used in Hindustani classical music. The instrument flourished under the Mughals, and it is named after a Persian instrument called the setar (meaning three strings). The sitar flourished in the 16th and 17th centuries and arrived at its present form in 18th-century India. It derives its distinctive timbre and resonance from sympathetic strings, bridge design, a long hollow neck and a gourd-shaped resonance chamber. In appearance, the sitar is similar to the tanpura, except that it has frets.